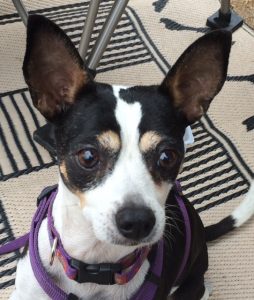 Daisy was Jessica’s introduction to dog sports. They were one of Agile Paws earliest agility students and then began taking nose work classes when Tammy started offering them. Even though Daisy had a broken, twisted leg due to abuse, it never stopped her from putting her all into competing.  At 13 years old, Daisy was the first Agile Paws Dog Sports student to earn an NW1 as well as the first to earn an NW2 when she was 14 years old. Unfortunately Daisy was a senior when she started classes and was unable to compete in NW3, where she no doubt would have done well if age hadn’t caught up with her. Anise was her favorite odor and Containers her favorite element.

Daisy was always the perfect demo dog and really shined when we worked with the special education students. Knowing just what they needed, she was always the star.

Fill out the interest list form and get on the list for future Intro to K9 Nose Work classes:

For Continuing Odor classes, email me.

I wanted to thank you for a super well-run trial last Saturday! I especially appreciate how everyone looked out so well for Merlin, by creating extra space for him, clearing the path to the staging areas, etc. It is truly appreciated!

My dog Daisy was an abused dog who had issues with trust of humans and other dogs. Training with Tammy helped Daisy become more confident and friendlier with dogs and people. She now can be off leash at a park doing  demos and competitions without a worry of her barking or growling at people or dogs.

I am glad I found out about nosework. Great training from Tammy. I enjoy all the opportunities for searching in various locations.

I just want to thank you for such a fun time yesterday! Despite the weather being a little warm, it was a perfect introduction to Specialty Trials for us. We had a great time and Finn LOVED his puppacino and new toy. The trial site was really nice and the club and volunteers super (loved the welcome wagon). You folks put on a great trial! Hope to do another sometime.

Volunteering is a valuable learning experience for anyone considering or now competing in the sport. Nothing compares to seeing many teams work out the same challenge. It’s also a “feel good” experience to know I’m paying back or paying forward the volunteers who have volunteered or will volunteer when I compete. Finally, it’s a great way to meet other participants in the sport, and learn why they use certain equipment, how they set up, who they train with, and where they practice.

Tammy is always patient and encouraging in  her teaching. Classes are laid back which makes it a great way to spend time with your dog after a long day. Tammy  analyzes why a dog might be having difficulties and sets up exercises that allow the dog and handler to practice it in incremental steps to avoid frustration. She is creative in setting hides to challenge both handler & dog, while making sure that the training is fun for all.

APDS is one big family. The love the support! I also love volunteering! I learn something new every time.  Jessica takes excellent care of us!

Jennifer with Buddy and Pip

Rusty loves to go to “work”. It is such a great bonding experience between dog and owner. It is a great way to burn energy and work their brains. He is usually falling asleep on the way home. I have been thankful to find this for rainy days and extra energy days.

Tammy is very kind, gentle and patient with dogs and people. She makes every exercise fun and fulfilling.

Tammy is patient with us and I enjoy the friendly atmosphere