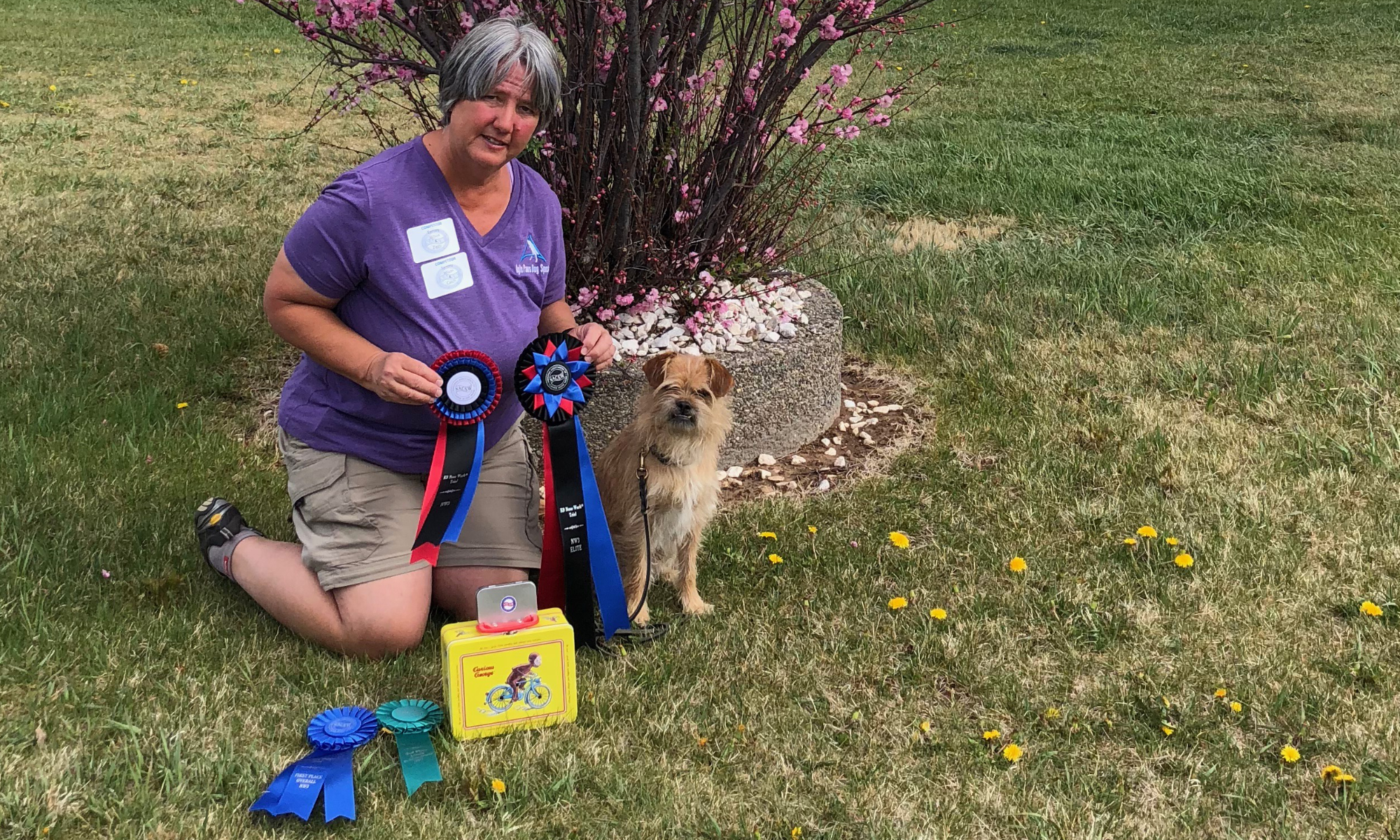 Tammy Wilson has always had a love for animals, especially dogs & horses. Her first experience with dog training was at an early age. When she was eleven years old, she took the family Dachshund to obedience class and placed 2nd at graduation.

Her next encounter with formal dog training didn’t occur until she was an adult. For their first anniversary, Jack & Tammy added a Cocker Spaniel puppy, Apache, to their family. At that point Tammy knew she wanted to do more with her dog and started taking obedience classes. That led to more advanced classes and competing in Obedience Trials. Tammy and Apache also competed in Scent Hurdles. A love of learning led to continuously attending seminars, workshops and conferences which continues to this day.

When Quest, a Flat-Coated Retriever, joined the family, Tammy discovered new areas of dog training. Versatility is important to Flat-Coat breeders and they encourage owners to do many things with their dogs. Tammy learned about Conformation shows and trained and handled her dog to his AKC Championship title. She also competed in Obedience and Hunt Tests. Then she discovered Agility in the early 1990’s and competed in agility for the next several decades.

Tammy decided to leave the corporate world and started Agile Paws Dog Sports in 2009 and held her first agility class in March of 2010. Soon after, Diane Baley introduced Tammy to the new sport of K9 Nose Work®. By 2013 Tammy’s interest in the sport had grown. With Diane’s guidance, Tammy dabbled with nose work with her border collies, Tryst and Catch.  Tryst really loved it and would have been a great nose work dog, but tragically she became very ill and passed away when she was 7 and never had a chance to do more than play the game. Catch was a bit slower to “catch” on to the game and didn’t really get into it until after Tammy was competing with Nick.

Tammy was taking classes from multiple instructors to learn as much as she could. In 2014, she took the NACSW™ Instructor Training Course and by 2015 was teaching nose work classes. Later that year, she and Diane decided to host a NACSW™ Nose Work Trial. It was a success and has since led to hosting multiple nose work events each year. With the success of her dogs, her students dogs and the highly successful events, in 2018 Tammy decided to focus exclusively on nose work.

Catch took a several tries to pass his birch ORT due to is environmental issues, but then he hit is stride and passed his NW1, NW2 and several EST’s on the first try. He’s not as fast and flashy as some dogs, but he is very methodical and consistent. He is now competing in NW3’s and enjoying the game. Catch has taught Tammy a lot about dog behavior especially patience and has a been instrumental  in making her a better instructor.

Peg Winchell and Mac started taking nose work classes and have grown to be an important part of Agile Paws as well. She does an outstanding job of making sure our Hospitality is well known among the nose work community. She makes sure everyone feels welcome and appreciated from the volunteers to the competitors. In addition she is always a big help at all the community events Agile Paws supports.